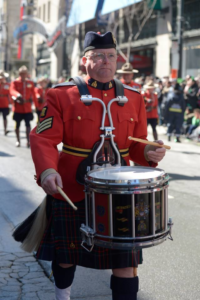 Harold (Hal) McLevy is the drumming instructor at the Montreal Piping and Drumming School. A mainstay of the Montreal Highland music community, Hal has been playing  bass, flourish tenor, and snare drums with Montreal area Highland pipe bands for the past 48 years!

As a youth, Hal spent the first 12 years of his drumming career with the Saint Laurent Scottish Pipe Band. He then played and served as an instructor with the Eastern Townships Pipe Band in Lennoxville QC for 4 years. Hal performed with the Saint John Ambulance Pipe Band for the next 13 years, then joining the 306 (Maple Leaf) Wing Air Force Association Pipe Band as lead tip for 12 more years. After a brief, 3-year retirement from the pipe band world, Hal was persuaded to come out of retirement in 2013 to take over the position of Drum Sargent for the RCMP “C” division Pipe Band where he remains to the present day.