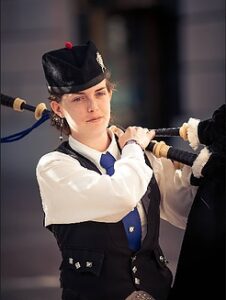 Jenna Dennison began bagpiping in 2003 (learning from Iain MacLeod in the very early stages of the Montréal Piping & Drumming School) and joined the school’s staff as an instructor in 2006. In contrast to her classical piano background, the unique sound of the highland pipes and the social nature of the piping world had her hooked from the start.

Jenna holds a Master’s Degree in music composition from James Madison University (Virginia), and finds inspiration in bridging the gap between classical and Scottish folk music. She pursued her piping studies under Jordon Anderson, occasional summer visits to the College of Piping in PEI, and currently studies under Captain Fraser Clark. An eclectic musician, she is known online for her YouTube video “Highland Bagpipe Strike-up Tutorial”, and has performed as an independent piper with instruments ranging from pipe organ, to Afro-Brazilian percussion, to theorbo. She currently plays with (and used to be pipe major of) the Montréal Pipes & Drums, and has been a member of the Montréal RCMP Pipe Band and the Montréal 78th Fraser Highlanders. Between band and solo performances, she has played in parades, ceremonies, and competitions throughout Québec, Ontario, New England, California, and Scotland, including opening the Edinburg Military Tattoo.