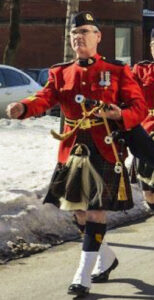 Lochie started playing in 1976 at the age of 12 under the tutelage of Pipe Major Morag Jamieson of the Sons of Scotland Pipe Band in Ottawa. As a Major in the 2870 Ottawa Service Battalion Cadet Corps, Lochie had the unique opportunity in 1982 to travel to Edinburgh, Scotland to participate in a program offered under the auspices of the Pipe Majors’ Course given by Capt. John Allan of the Army School of Bagpipe Music. Soon after, Lochie joined the Cameron Highlanders of Ottawa as a Junior Officer after a brief period teaching piping to their cadet corps. Lochie remained with the Cameron Highlanders for six years, serving as a piper and also the band officer responsible for band administration, budgets and supplies.

In 1983, Lochie began his career as a police officer with the Nepean Police Force. From 1985 to 1995 he served as its piper until the Force amalgamated with the Ottawa Police Service where he was transferred into criminal investigations. Working in an undercover capacity made band membership impossible, and so he took a seven year hiatus from piping in order to pursue his career. 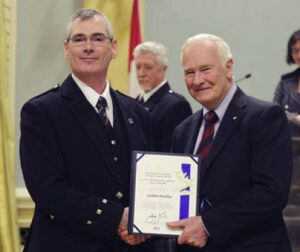 Since his return to piping, Lochie has played with the Ottawa Police Service Pipe Band, served as Pipe Major in the Sons of Scotland Pipe Band Grade V competition band, and also currently serves in the capacity of Pipe Sergeant in the Sons of Scotland Grade IV band. He competes every year with the Sons of Scotland at the World Pipe Band Championships in Glasgow, and on three such occasions, led the band as Pipe Major. He has also piped for and personally met the Queen on two separate trips to Balmoral Castle. In 2014, he was awarded the Sovereign’s Medal for Volunteers. He joined the Royal Canadian Mounted Police Pipes and Drums C-Division in December 2015 where he currently holds the position of Pipe Major. Lochie retired from Ottawa Police in 2015 after 32 years of service. He fills his time with solo competitions under the PPBSO at the Grade II level in both light music and piobaireachd.