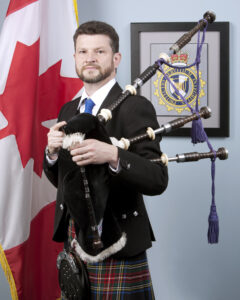 Jordon learned bagpipes from James Dobbie as an 8 year old and first performed in public as a soloist at 10 years of age. He joined the Pierrefonds Pipes and Drums then later the Black Watch Cadets before taking a full time summer job playing bagpipes for tourists as part of the 78th Fraser Highlanders at the Old Fort on Saint Helen’s Island in 1982. He remained with the Frasers for 16 years and was their Pipe Major and one of their primary instructors for many of those years. Jordon was a member of the Black Watch Royal Highland Regiment of Canada from 1985-2000 and was their Pipe Major and Chief Instructor from 1996-2000 when he retired from military service and became one of the founding members and the first Pipe Major (2000-2010) of the Montreal Pipes and Drums.

Jordon was part of and coordinated the 4 person 1989 World Record setting bagpipe marathon team which played for 120 hours non-stop. He has also been the featured soloist at the Kingston Tattoo, the Ticonderoga Tattoo and The International Military Music Festival in Quebec City as well as performing for the Queen’s Birthday in London, England and in the Edinburgh International Military Tattoo. He has won a variety of bagpiping awards and top three honours in solo grade 1 and 2 competitions at a multitude of highland games over the years and has lead several pipe bands to a number of top 3 finishes in Maxville and Montreal. As Pipe Major of the Montreal Pipes and Drums in 2002, Jordon lead the band to a 1st place victory in Grade 4 at the Montreal Highland Games. Jordon remains an active member of the Montreal Pipes and Drums and continues to play for a large variety of events as a soloist.

Jordon has been teaching bagpipes to all levels of students from beginner to advanced, since 1982 and has been an instructor at the Montreal Piping and Drumming School since 2010. Many of his former students are now playing in Montreal’s various pipe bands as well as in bands in Ontario and elsewhere.